To inquire about prices and purchasing artwork contact Curator Jennifer Zwilling at jzwilling@theclaystudio.org or 215-925-3453 x121

View the article in Philadelphia Weekly >

View the article from WHYY >

On the Bank of the Nile

On the Bank of the Nile

Get inspired by the exhibition and then stop by the Maker Place to make a clay project every Saturday! You are led by one of our teaching artists and your project will be ready for pick up in 2-4 weeks! (no workshop on 6/4, 7/2 & 8/20)

Join us to hear Artists, Council, and Curators

Community celebration for our first exhibition in our new facility. Join us to share this marvelous moment. There will be tours of the exhibition and hands-on art projects for everyone. The event is free and open to the public.

Ouroboros To inquire about prices - Curator Jennifer Zwilling at jzwilling@theclaystudio.org or 215-925-3453 x121

Description:
Works shown: Ouroboros, Waterworks, Linea, Linea Stack. Hatch’s work grows out of her childhood fascination with her family’s heirlooms. Hatch was particularly captivated by the ceramics, some of which were brought from Europe on her ancestors’ merchant ships in the 18th century. Today the artist is known for her signature ‘plate paintings,’ large-scale installations that draw directly from historical sources . In the case of the artwork included in Making Place Matter, Hatch draw directly from a plate, showing the Philadelphia Water-works, (c. 1820-1830); a French 18th century floral textile and a plate made for Martha Washington, the first First Lady of the United States, that has a central golden sunburst and subtle blue rim depicting a serpent swallowing its tail.

Description:
On the Banck of The Nile, an awe-inspiring sculptural installation is based on the mashrabiya, a traditional pierced screen used in Islamic architecture as a threshold between public and private space. Reflecting the artist’s familial roots and larger cultural inheritance, the geometric patterns are one of the central tenets of Islamic art. Said’s patterns in the carved clay and wood marquetry have no beginning or ending, a metaphor for the infinite universe. In his words, “Islamic art talks about the power of Allah, and the infinity of creation; there is no limit to it.” For this piece, Said taught himself the difficult skill of wood inlay or marquetry. Its boat-like forms reflect the artist’s memories of hours spent in his youth in Egypt, sitting along the Nile River watching the wooden boats and water flow by.

Description:
The series A Mi Vida began as a way for the artist to prolong the sensation of holding her now elementary school-age daughter, Vida, in her arms as a baby. The project evolved from a personal response to motherhood into a rebuke against the trauma inflicted on children and families separated at the US-Mexico border. These sculptures are exhibited as a group, not as individuals, to embody the artist’s anguish at the tragedy of thousands of families separated. Each stroller contains a child form meant to connect the viewer immediately with children in need of care. Babies in strollers are a familiar sight in all neighborhoods of Philadelphia, and this common image emphasizes the universal importance of protecting children from harm. Velarde reminds us: “These children are as real as our children.”

Ibrahim Said working on On the Bank of the Nile 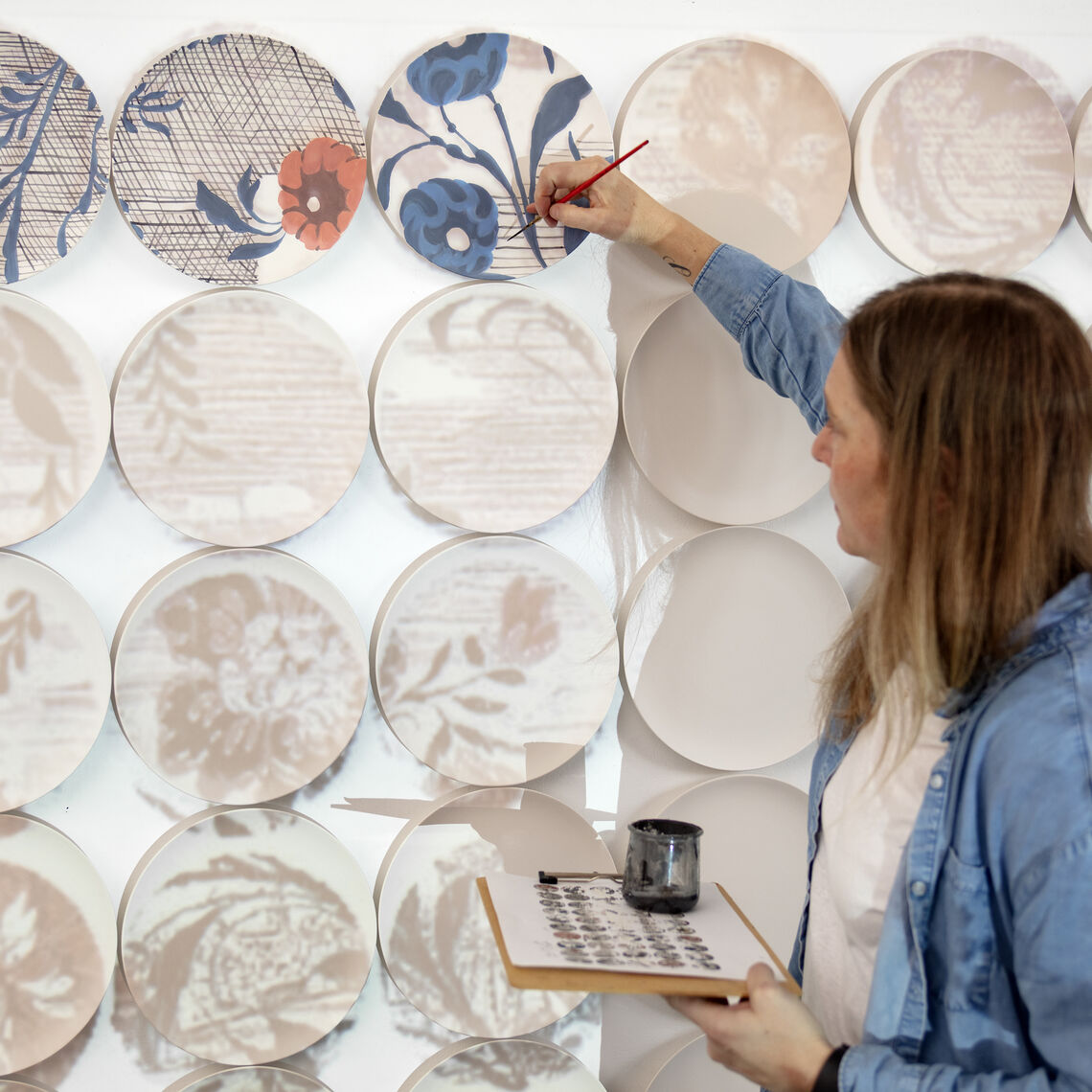 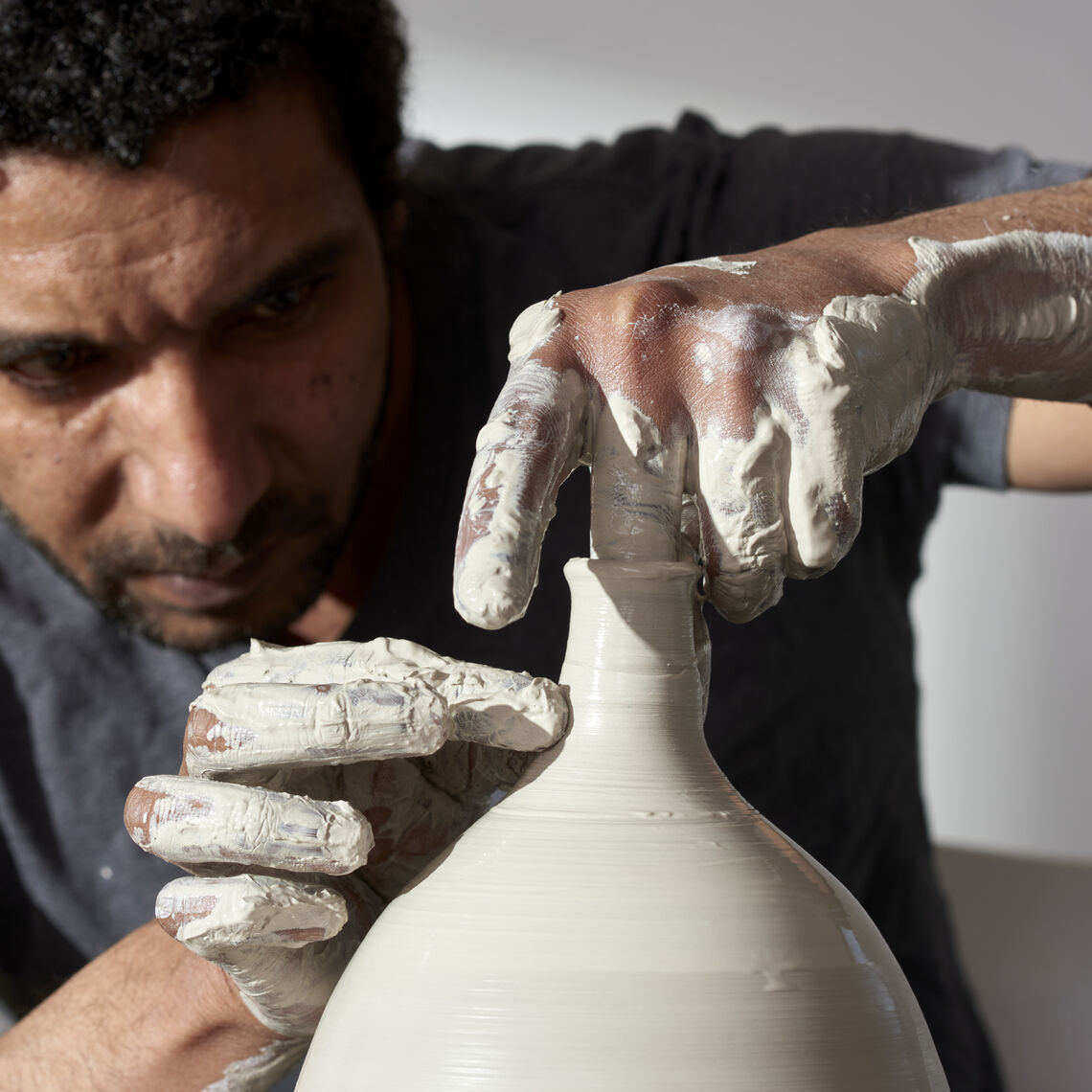 PHILADELPHIA, PA, March 18, 2022 – Making Place Matter is an ambitious and experimental exhibition,  symposium, and publication that will accompany the opening of The Clay Studio's newly built home located in Philadelphia's Kensington neighborhood at 1425 North American Street. On April 8, The Clay  Studio will enter into a new chapter of its nearly 50-year history, with the concept of 'place' taking on critical importance as the organization grows into its new home. Larger classrooms, state-of-the-art  studios, an outdoor sculpture garden, a rooftop event space, and luminous new gallery spaces will meet the increased demand from students, artists, and visitors. Just as significant, building a resonant conversation between clay, artists, and audiences in the new Jill Bonovitz Gallery, Making Place Matter is organized around the complex meanings of place in our contemporary social conversation. The exhibition will open on April 23 and run through October 2, 2022, and is free to the public.

Using clay and cultural heritage as sources of inspiration, Making Place Matter will feature Philadelphia based, Peruvian-born artist Kukuli Velarde, American-born, Massachusetts-based artist Molly Hatch, and  Egyptian American artist Ibrahim Said, now based in North Carolina. Each artist explores the idea of  place with regard to personal history, cultural heritage, and social justice. Clay is the material  embodiment of place. Made of the earth we stand on, clay has the capacity to articulate cultural  perspectives, social engagement, and artistic intentions. By using clay as a means to investigate ideas of  place, Making Place Matter will create powerful tools to share with the new and established  community, creating a feeling of belonging within the Jill Bonovitz Gallery for The Clay Studio's various  constituencies.

Kukuli Velarde's A Mi Vida project includes a sculptural installation, painting, performance, and off-site interventions. The series focuses on the artist's desire to prolong the sensation of holding her  now elementary-age daughter Vida in her arms as a baby. It also embodies her anguish at the family  separation at the U.S. - Mexico border. Like many of Velarde's works, these clay sculptures entangle  reality and dreamscape, blending influences from contemporary life and ancient indigenous Peruvian  imagery and patterning.

With skills passed down from his father's work in a centuries-old Egyptian pottery town, Ibrahim Said's  lattice-like geometry is inspired by the traditional Islamic mashrabiya, an architectural screen that  merges decoration and function. In Said's hands, these slender pierced ceramic panels twist and bend  into the awe-inspiring sculpture, On the Bank of the Nile.

Also drawing on her ancestral heritage, Molly Hatch's grand-scale "plate paintings" take historical  patterns – often from porcelain plates – as their source. Hatch seamlessly merges the past into the  present as she enlarges historical ornament vaulting it into near-abstraction.

For the artists, the exhibition will allow them to connect with visitors on a personal level. Making Place  Matter artists will hold weeks-long residencies at The Clay Studio building, offering audiences direct  access to the artists in relation to their work.

As a forthcoming member of a culturally rich neighborhood experiencing the turmoil of rapid  gentrification, The Clay Studio will work to demonstrate its commitment to be a positive force within  this changing environment. Making Place Matter will thoughtfully advance The Clay Studio's founding  principles: collaboration and creative expression.

Even before the new facility's doors open, "place" has played an essential role in how The Clay Studio  has approached its move. The organization formed an Exhibition Council that includes 15 Kensington  neighbors, including artist Cesar Viveros, community organizer Iris Brown, current artists at The Clay  Studio, and cultural partners, including Norris Square Neighborhood Project and Taller Puertorriqueño. Together, the Exhibition Council is exploring ways to create a welcoming and meaningful space for every  visitor.

The Clay Studio has partnered with Philadelphia organization Tiny WPA to design furniture for the  gallery for visitors to contemplate the exhibition. The Community Studio offers space for audiences to  reflect on the show by making their own art with clay. Making Place Matter marks the first time The  Clay Studio's hands-on offerings and the curatorial programs are linked. The Clay Studio staff are  working with Kensington publisher, The Head and The Hand on the Making Place Matter exhibition  catalog. Lastly, a symposium will catalyze the connections between clay and place. Generous funding  from the Pew Center for Arts and Heritage has made the many aspects of this project possible.

About The Clay Studio's New Home

This April, The Clay Studio's new 34,000-square-foot home at 1425 North American Street will open in  the heart of Philadelphia's South Kensington neighborhood. The new building, now nearing completion,  will allow The Clay Studio to expand its services and spaces by 67%, paving the way for vast new  possibilities for studio art, arts education, and community engagement. The facility, designed by  DIGSAU, will be the first-of-its-kind ceramic arts facility built from the ground up in the United States. A  new architectural landmark, its brick facade was inspired by clay's creative possibilities.

"Place" has been an essential theme to The Clay Studio since its inception in 1974 in Old City,  Philadelphia, as a space for shared creativity around clay. Over the years, The Clay Studio has grown  from a collective of five artists to a thriving, diverse, and collaborative fellowship of artists, teachers, and  professional staff serving 35,000 people a year. Over the last 25 years, The Clay Studio has engaged and formed long-lasting relationships across Philadelphia through its children-focused Claymobile program. In recent years, educational programming has expanded in South Kensington to

include artist-led workshops, classes, and discussions to better understand culture and place. The new  facility will deepen relationships between The Clay Studio and the South Kensington community.

Making Place Matter has been supported by The Pew Center for Arts & Heritage.