Our Shop, Gallery, School, and Offices will be closed on May 30 in observance of Memorial Day.

Odundo’s artworks are redolent of the human body in a way that reminds the viewer strongly of the inherent connections between the simple vessel form and the concept of the body as a vessel. With simple curves and color variations her sculptural vessels convey the depths of the connection between humans, earth, clay and vessels. The universality of her formal language has been deepened by her formal references to classical forms from ancient cultures all over the world. Her study of Greek, Chinese, Aztec, and African forms have allowed her to find the simple, yet powerful shapes common to them all.

Odundo is among the few ceramic artists in the world whose name is widely recognized within and beyond the ceramics world, her name is synonymous with great works of art, dedication to teaching the next generation and the ability to connect cultures from around the world.

This March and April The Clay Studio is honored to host Magdalene Odundo as a Guest Artist in Residence. She will be using our Harrison Gallery as her studio during the month of March and continuing to work in a private studio at The Clay Studio in April. The Clay Studio nominated, and she was awarded an Honor Award from the National Council on Education in the Ceramic Arts (NCECA). During her time in Philadelphia she will also give an artist talk at The Philadelphia Museum of Art on April 8 th at 2pm.

Odundo was born in Nairobi and was educated in Kenya and India. She started her artistic career as a student of Graphic Design and moved to England in 1971 to pursue her vocation. There she attended the Cambridge College of Art, and during those early years in the country, discovered a love of pottery. With the understanding that ceramic art is a medium that connects cultures all over the world, her new interest took her back to her native Kenya, as well as Nigeria, where she sought out traditional techniques that spoke of her own cultural roots. Studying hand-building methods in Kenya and Nigeria, she became aware of similar techniques being utilized in other cultural centers around the world. In San Ildefonso Pueblo, New Mexico, Odundo found blackware vessels. Her world travels garnered her the skills she would then bring back to England and apply to her poetic forms.

After returning to England, Odundo earned a BA from St. Joseph’s College of Art and a Masters degree from the Royal College of Art, London. She went on to teach at the Commonwealth Institute in London and the Royal College of Art. She just recently retired from her professorship of ceramics at The Surrey Institute of Art & Design, University College. In 2008 she was appointed Office of the Order of the British Empire in the Queen’s Birthday Honour’s List for services to the Arts. She was also awarded the African Art Recognition Award by the Detroit Art Institute’s Friends of African and African-American Art. In 2011 she was appointed a Patron & Trustee of the National Society for Education of Art & Design, NSEAD. 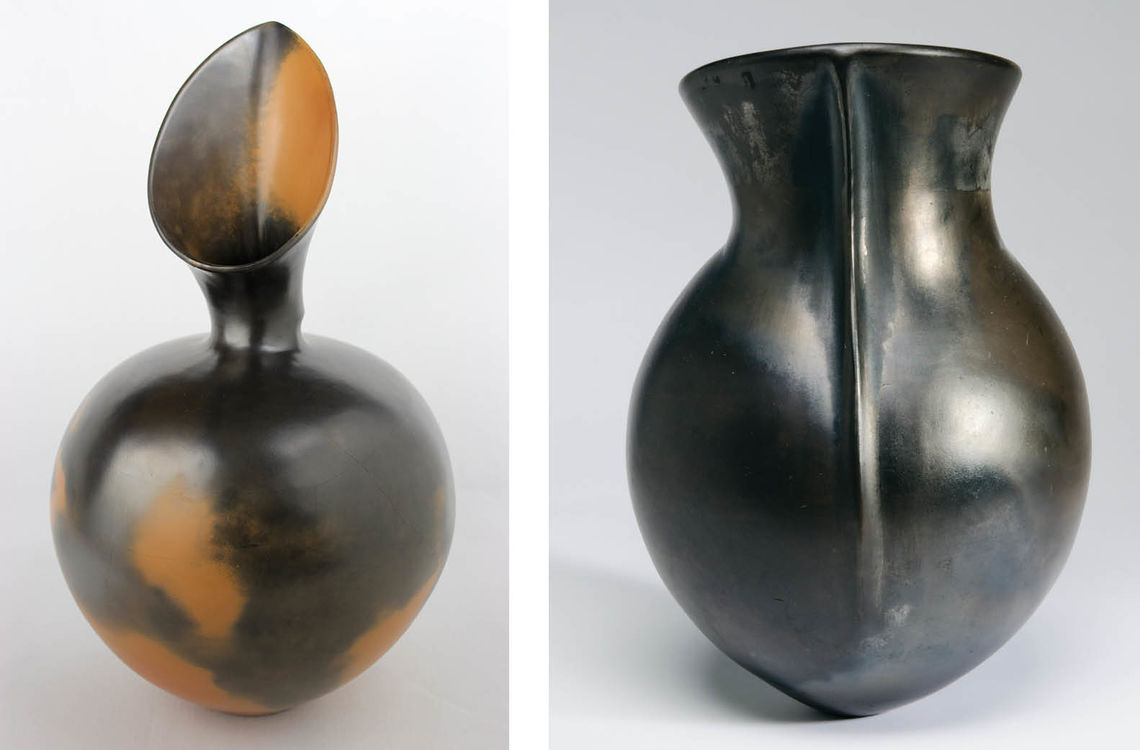