Our phone system is down as of 2:30pm, Dec. 7th. Please email info@theclaystudio.org if you need immediate assistance.

Vicini’s work has been strongly influenced by nature, his love for flora and fauna evident in his highly realized sculptures. Made in porcelain, his most ambitious works are tableaux like, groupings of individual sculptures, each that contribute a thread to the overarching theme. Vicini often uses rodents as his subject matter “as representations of human psychological states.” He writes, “At best a rodent is a vulnerable prey animal and at worst a filthy pest. In my work they become metaphorical self portraits, and allegorical representations of humanity.”

Man’s inhumanity to man and humankind’s inability, at times, to be empathetic to one another are themes explored in his work. A recent piece, Idiotheim is a world Vicini built in porcelain, “a world where insanity always triumphs over reason, and idiots rule. It is a world consuming itself even as it struggles to be born.”

Chris is an American born sculptor living and working in Gothenburg, Sweden. A Maryland native, he received his BFA from Wheaton College, Norton MA, and his MFA from the Rhode Island School of Design, Providence RI, in 2002. Since that time he has exhibited his work internationally most recently at the Walbrzych Museum, Walbrzych Poland, the Rohsska Museum, Goteborg Sweden and White Space Projects, Palm Beach, FL. His work is in the permanent collections of the RISD Museum, Providence, RI, Rohsska Museum, Goteborg Sweden, and The National Museum, Stockholm Sweden. 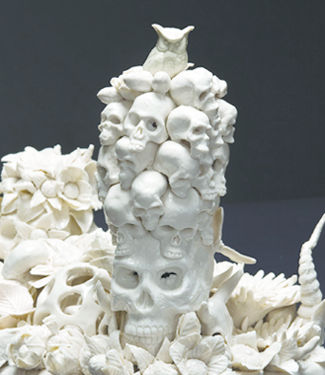 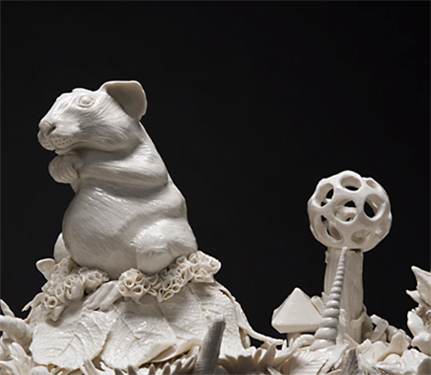