Brian Jones is a studio artist living and working in Portland Oregon.  He received his BFA from the University of Nebraska-Lincoln, and his MFA from Southern Methodist University, Houston, TX in 2007.  Since that time he has taught and worked primarily as a maker of functional wares, creating highly personal tableware that he exhibits nationally including the Shop at The Clay Studio.

Using a terra cotta body, Jones creates work using varied methods, throwing on the wheel and through the use of slabs primarily.  All of his forms are fairly simple, serving as canvases for his surface treatment.  There is freshness of touch in his handling of his chosen material and in the manner in which he surfaces his pieces.  Using loosely applied white slip and white terra sigilatta, Jones allows his terra cotta body to show through in areas creating depth of surface. Sometimes he carves through the slip defining seemingly naïve and incredibly simple forms; circles, lines, grids and squiggles emphasized through the application of varied colored glazes, also loosely applied. Jones exploits the idiosyncratic properties of glaze, allowing it to freely move and flow, the white ground serving as a strong foil for his sparing and bold use of color.

Jones’ creative expression extends beyond ceramics and includes works on paper, tile and mixed media sculpture (this will be the work Jones focuses on while in residence at The Clay Studio).  All of these works possess similar qualities to his pots – fresh in feel, simple in composition, confident in their creation his unique aesthetic evident in all. With Jones, one form is articulated as sculpture in three-dimensions, used as surface decoration on functional pots, and become the subjects in his drawings.

Jones has titled the body of work he plans to begin while in residence at The Clay Studio, Everyplace I’ve Ever Lived.  Planned as an ongoing and long-range body of work, each installment within the series will focus on a place that Jones has lived over the past 31 years, starting with his present home purchased in 2009 in Portland, OR.  He writes, “My intellectual curiosity and instincts are drawn to the concept and the physicality of houses.  Their importance in how we develop as people, how they act as memory trippers, and their importance as historical objects, has become a major reference point for my work.”

“I see this work as the intersection of memory and historical fact as well as the fluid interpretation of both.”

Brian earned his M.F.A. in 2007 from Southern Methodist University. From 2003-2005 he was the studio assistant for Virginia-based studio potter Silvie Granatelli. He was a resident artist and cook at the Watershed Center for Ceramic Art in Edgecomb, Maine. Prior to that he spent a year at the University of Nebraska-Lincoln in 2001-2002, and earned his B.F.A. in 2001 from Alfred University. 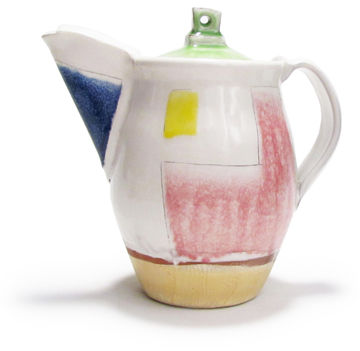